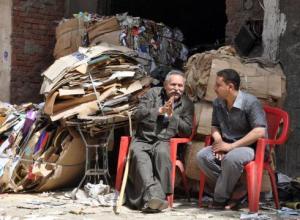 Zabeleen is a community in Egypt that shows how people can self organise to manage their own waste. At first glance it can seem like a chaotic place ewith the community living in what looks like a garbage dump. But a deeper look reveals well organised and highly effective waste management system for Cairo.

Cairo like many cities around the world is going through a massive urbanisation with governments struggling to keep up with infrastructure developments. What has developed in Zabeleen is a decentralised, participatory and low tech approach to Cairo’s waste management which also provides a livelihood for the community. They have been collecting and recycling Cairo’s waste for over 70 years without little acknowledgement from the state or secure land tenure.

Cairo’s waste management system is a mix of formal and informal systems. They governments policy since the early 2000’s has been a focus on privatisation, limiting their involvement and involving citizens in the cost of paying for the services. Local authorities manage the solid waste collection and contracts are aware to private companies for the collection and transfer of waste. Composting is mostly managed by the formal sector whilst recycling is managed by the informal sector. 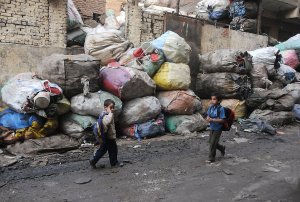 The Wahiya and Zabeleen are the two cultural groups that manage the informal waste system. The Wahiya are Moslem migrants from the Western Desert oasis of Dakla, who arrived in Cairo about 100 years ago and entered into contracts to receive a monthly fee for collecting and disposing of waste. The Zabeleen arrived in the 1930/40s in search of employment and discovered they could make a living by renting garbage routes from the Wahiya.
Their system of waste collection has ended up being both more efficient than the state run or private systems and has provided employment for many people. However the community and their livelihoods are under threat as the government seeks to encourage privatisation of its waste service. 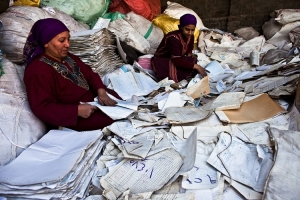 The community live in makeshift structures on the west and northern fringes of the city. They process more that 6000 tonnes of garbage a day, recycling 85% of them through micro enterprises. The waste is sorted into 16 categories like tin, glass, rags and plastic which can be sold. Organic waste is fed to the pigs they breed. The pigs are central to the their livelihood strategy and come from the rural tradition of owning a pig yard. Every family owns one, usually adjacent to the sleeping quarters, and they use this space to sort and store domestic waste. The meat from the pigs is then sold to hotels for good profit. This creates a cyclical economy where the waste activities generate further employment for people in other neighbourhoods. 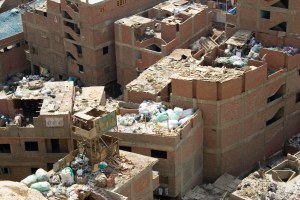 The settlements have continued to grow over the years. Growing vertically in a sort of haphazard manner. The flat roof terraces are increasingly being used to sort garbage and rear the pigs, creating a colourful messy aesthetic. This highly localised method of recycling has a low carbon footprint, reducing the need for transportation, landfilling and compaction. Their recycling system is cited as one of the best in the world with the highest material recovery at 30% of the total waste generated. It is a high efficient system reducing the demand for transport, collection and disposal as the scale and organic shape of informal settlements are not designed for large removal trucks.

Zabeleen is an interesting example of how communities can develop appropriate and local methods of successfully managing their urban spaces and it would be a great shame to see this thriving ecosystem impacted as the governments privatisation of waste disposal threatens to do.